Board Changes at Sun Valley Lodge 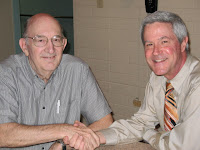 Board Changes at Sun Valley Lodge

Sun City, Arizona – November 6, 2007 – Sun Valley Lodge announced that long time board member Colonel Dilmore has relinquished his seat on the Sun Valley Lodge board of directors after 11 years of service. Colonel has held officer positions for several of those eleven years. He has been the board president since October of 2005 and has also filled the roles of vice president and treasurer.

“Colonel has always been up to the challenge,” said Lodge executive director Michael Fahey. “He has been rock solid and always given the board his best. We are extremely grateful for his leadership and going to miss his guidance.”

Barbara Levy will take over as board president and John Lischer will fill the vice president seat that Barbara is vacating. Thala Taperman Rolnick will continue to serve as treasurer and Julia Ferguson will remain as Secretary.