“If I Can Make You Laugh, I Can Laugh Too” 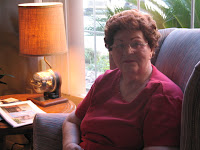 There is good news for fans of Sun Valley Lodge’s resident comedienne. Eleanore Zahorcik has begun archiving her huge collection of jokes and will make them available for her fellow Lodge residents to look through.

You might think that someone with as many ready jokes as Eleanore has would have lived a carefree life, but nothing could be further from the truth. Eleanore grew up on a farm in western Wisconsin and along the way, she has milked cows by hand, raised eight children – and buried three, tended bar, managed a grocery store, earned bachelor’s and master’s degrees, and taught special needs kids.

Rather than knocking the starch out of her, all this living eventually led Eleanore to the creation of her life philosophy: “If I can make you laugh, I can laugh too.”

After leaving the farm, Eleanore managed a grocery store/beer bar. She credits her experience tending bar as her education in joke telling. “I learned to tell jokes from the Norwegian (immigrants) who would stop in for a drink.”

Eleanore’s sense of humor and ability to tell jokes not only helped her sell beer, but later allowed her to communicate with her students. In between having children, Eleanore launched a teaching career and worked with special-needs kids and children whose first language was not English. “If I could get those kids to laugh, they enjoyed school and they learned.”

Eleanore began actually collecting jokes after her youngest daughter died. A few months ago, her grandson David told her he would like to archive her collection and put it in a bound format for family members. Eleanore and David broke the jokes into several categories and began picking favorites. Their first volume of jokes has been assembled and Eleanore will make a copy available in the library. She is hoping to have five volumes by the time she is finished.