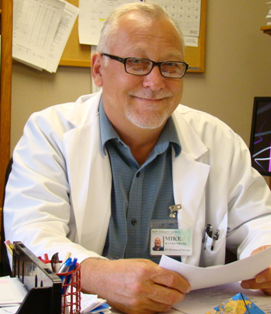 Mike Mankenberg is a
Glendale resident and was named Director of Nursing at Sun Valley Lodge in
January of 2012. Mike was born in northern Minnesota and grew up in Mitchell,
South Dakota. He attended Northern State College for 1 ½ years before transferring
to the University of South Dakota where he graduated with degrees in Nursing
and Psychology.

After graduation, Mike
moved to Omaha for a year before relocating to Phoenix where he was employed at
St. Luke’s Medical Center and at Scottsdale Camelback Hospital. Following his
father’s death in 1983, Mike returned to the northern Midwest and began his
work with the elderly. He served as a nursing supervisor at Ah-Gwah-Ching
Nursing Home, a state facility for the elderly, and at the Minneapolis Veterans
Home in Minnesota for 11 years before getting the itch to return to the Valley
of the Sun.

Mike’s first job after
resettling in Phoenix was with the State Hospital, but it was not long before
he returned to serving the elderly. Since 1995 Mike has worked at various
long-term care facilities across the Valley doing staff education and holding
assistant director of nursing, director of nursing, and infection preventionist
positions.

Mike’s Glendale home is
a “mini-farm” where he grows vegetables and raises a variety of animals
including chickens, ducks, dogs, and cats. He says that his new job matches his
laid back lifestyle. “I was looking for a place where people live rather
than just pass through. The Lodge is homey, slow paced, and focused on what is
best for residents. It feels like home … like a place where people take the
time to visit and do nice things. It is also a place where employees are
committed to their jobs and stay for a long time.”