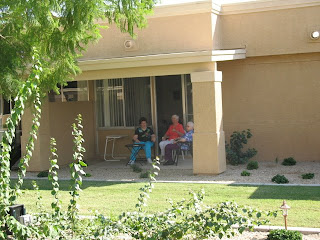 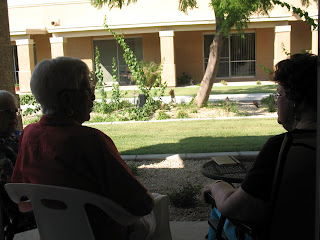 Sun Valley Lodge has successfully completed its 2007-2008 renovation project and residents are thrilled with the results. As the first retirement community in Sun City, people have become accustomed to the look we created in 1965. Our new look, described by board president, Barbara Levy, as “Tuscan–style”, includes a new front facade, enclosed courtyards, and several landscaping improvements.
The change is so pronounced that we have had several people tell us that they have driven right past the Lodge without even recognizing us!

Lodge residents Yvonne Gyger, Esther Miller, and Eleanore Zahorcik recently gathered on Eleanore’s patio and talked about the renovation and life at the Lodge in general. “I
think it is fantastic,” said Yvonne of the Lodge’s new look. Esther agreed adding, “It sure is a beautiful thing when you come down the street and see how nice the Lodge looks. I am just so proud.”

Eleanore and Yvonne both have apartments facing one of the renovated courtyards where we added walls, iron gates, extended the patio overhangs, and made several landscaping improvements. In addition to the work we did on the courtyards and patios, we also added new stucco and a stone veneer to the front entrance and a painted, wrought iron fence around the outside of the complex.

During the course of the discussion, Esther relayed a story that sums up the way many residents feel about Sun Valley Lodge. “I am always talking about what a nice place to live this is, but I don’t think my kids believed me about just how special the Lodge is. After their last visit, though, my son agreed with me and said, ‘I don’t think there is another place like this in the United States.’ ”